Beer cellaring is all the rage. In this review we put a year old bottle of Brooklyn Black Ops —the Woodford Reserve bourbon barrel aged Russian imperial stout that is bottled flat and then fermented with champagne yeast— up against a fresh bottle. As an restless beer geek, I’m hoping my patience with the 2010 is not rewarded. 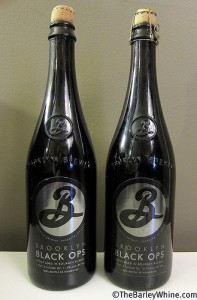 No blind tasting here, and no expectations other than deliciousness was forthcoming. Tasted them together at around 55 °F.

Subtle whiskey and sweetness in the nose. Chocolate and some vanilla flavors. Less thick than any comparable Russian imperial stout. The alcohol is subtle. Fresh this is very drinkable for such high ABV.

Huge chocolate, big vanilla notes, sweet and yummy. Great blend of bourbon, chocolate, a little spicy and hoppy. Well carbonated, with the same medium mouthfeel of the 2011. Has not lost much of the bourbon or chocolate in 1 year of aging.

Go big or go home! While both Black Ops have the sophisticated drinkability surprising for a RIS, the ’10 was preferred by everyone. It was tasty when we reviewed it fresh, but now some of the booze has faded and the flavors are perfectly combined. Not usually a fan of aging brews, but in this case ’10 improved with age. Founder’s KBS was better with a year of age on it for me and we had the same surprising experience here. The ’11 is available in select locations. Seek one out for your cellar.