One of the most sought after 12oz beers of the past year, Prairie Artisan Ales Bomb!  is another in the increasingly popular style of spicy stouts mixed with the already popular, and well covered by us, coffee beer. Can an Oklahoma brewer take on this complex blend of flavors?

Kickstarter, that micro finance wonder-boy that promises to bring back 80’s childhood favorite Reading Rainbow, has helped raise funds for one of the most talked about breweries in America. Prairie Artisan Ales began with gypsy brewers the Haley brothers getting backing from distributing powerhouse and one time podcasters, Shelton Brothers. With a good web presence, and an awareness of beer geek trends like unique glassware, the Haleys raised more than double the $10,000 they sought, and were off and running. 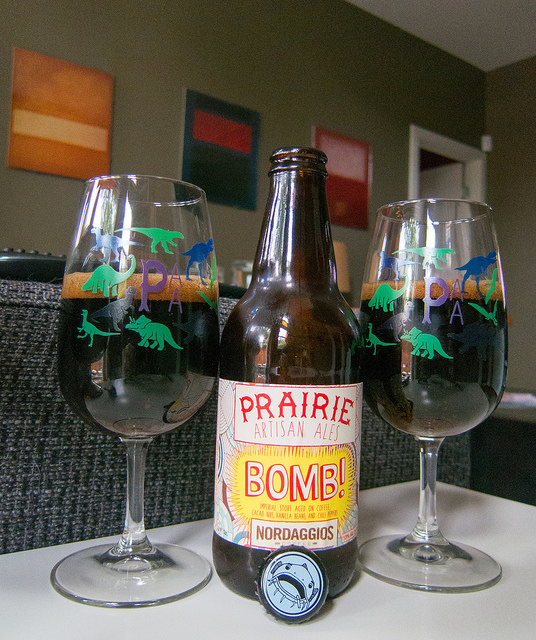 Bomb! is an imperial stout ‘aged on coffee, cacao nibs, vanilla, and chili peppers’. The coffee is an espresso blend from Oklahoma roaster Nordaggios. The peppers are ancho chilies. It is available in 12 ounce bottles within Prairie’s distribution region, where 13% ABV beers are permitted.

Prairie Artisan Ales Bomb! is a dark brown pour with a significant head of micro-bubbles that dissipates in short time. Nose is filled with coffee, cola, chocolate, chilies and alcohol. The carbonation is impressive in this 13% ABV stout, leading to a mouthfeel that is think and slick. Taste echoes that nose with even more coffee, which borders on overly bitter, sweet malts playing the counterpoint to espresso, and a vanilla element creating a delicious blend. The heat from the peppers is subtle enough to only slowly show itself after a few sips. Many spicy beers do well in small samplings, this one works throughout a much large tasting, even the full 12oz bottle. Finish is vanilla, coffee the chilies and booze.

This beer is crazy good. As a fan of coffee beer I appreciate java being thrown in with the vanilla, peppers,  and chocolate. For those that do not drink coffee, the espresso roast might be a tad bitter, even if you like some coffee beers, but that is the only downside to what is an impressive stout.