Sun King Brewing’s Grapefruit Jungle IPA, or GFJ, brings the small Indianapolis brewers vision for a huge tropical IPA to a 16oz can.

Founded in 2009, Sun King seemed to come out of nowhere to strike a cord with craft beer drinkers from Indianapolis and beyond. Unfortunately, being a startup with limited production capacity, Sun King currently has distribution limited to intrastate sales. As such, most readers will have to travel to make some effort to same their beers. Hopefully a new facility in Fischers will get more of their popular beer such as the GFJ to shelves.

Sun King GFJ represents a strong statement by Indiana’s second largest brewer, declaring it “…an IPA as revolutionary as Rock & Roll itself”. Sharing a state with the likes hop addicts of 3 Floyds Brewing sets a certain expectation for what an IPA, and in particular an AIPA (think Alpha King or even Zombie Dust), should taste like. From the boldness of the commercial description to the intense graphics on the can, Sun King believes they are up to the challenge 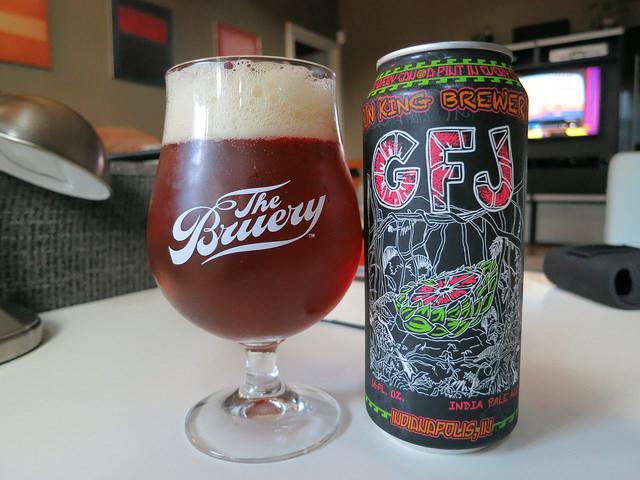 With a strong carbonation from the can, the blood orange IPA pours with good head retention, showing off white bubbles that are not quite foamy. The nose brings out the expected strong hop notes, although perhaps more citrus than the tropical fruits you would expect to dominate from the the beer’s name. There is some grain there, but again less than you might expect from the ruddy color. Taste is a revelation:the grapefruit and other tropical hop notes are all over this beer, followed by the biscuit malt and then the kick of bitterness from the 77 IBUs. This IPA might not win a gold medal based on a small sample, this is a recipe created to make a drinkable beer you want more of not simply after the first sip, but as you drain the last. The body is thick enough for the style, with the semi-dry finish with barely a trace of the alcohol.

I knew nothing about Sun King GFJ before this sampling, and was very impressed. The hop blend and water, yeast, and whatever magic makes an IPA taste the way it does all made this beer stand out as both slightly different than any other AIPA/DIPA in memory, and right in the camp with some of the best. Grapefruit Jungle is currently a limited seasonal release, so grab a can or two if you get the chance, this beer is a great example of what Sun King can do.