The state of Oregon grows a lot of hops. This has lead logically, to a large number of breweries; Portland claiming more breweries per capita than any city in the US. No matter their location, most often work with hops in the form of dried out pellets. However,  the brewers with access to the limited window when fresh hop leaves can be used at their oily best for a bolder hop profile, one that cannot be replicated. Over the years, these seasonal beers gained a passionate following in the Pacific Northwest, leading to the Portland Fresh Hop Fest and many other autumnal events celebrating fresh hops.

Then again, places like America’s winter lettuce capital Yuma Arizona also take pride in their seasonal crops. Selling all that lettuce may net you a ton of cabbage, but it doesn’t mean there is anything special about your greens, nor is it a great reason to paint your face. Heady Topper and Pliny don’t use these fresh hops, so is this just another parochial fetish of homerism, or can wet hopped beers offer something new and yummy?

Brewed in previous years for draft-only release at the brewpub, Fat Head’s Hop Stalker Fresh Hop IPA was first canned in October of 2014. Bless Fat Head’s for stamping a born on date! This can clearly showing ‘Canned on 10/14/14’. The 16 oz can also advises drinkers to, ‘Pour it slowly, unfiltered beer captured inside’. Surly seems to of started the trend of telling people with all that Greg Koch charm what to do with their canned beer (‘Beer for a glass, from a can’) copied by The Alchemist and now Fat Head’s. The Hop Stalker can goes further telling you to ‘drink it fresh’, ‘chill out’, and ‘Stalk a recycling bin’. What, no orders to ride a bike daily or grow a beard? These dictates to customers are becoming a marketing cliche like something out of Roddy Piper’s world in They Live. Hopefully the liquid inside the can is more innovative.

Having not read the warning on the can about pouring too quickly, I cracked Hop Stalker and filled the pint glass as one normally would. The head is moderate in density, and dissipates at an average pace. Despite a fast pour, the beer came out a semi-transparent deep copper, not super cloudy. Nose is affirmative in its big time citrus fruits, blended serenely with pine needles and a strong dankness that foreshadows big flavor. The taste hits you right away with the pungent, fresh hop flavors of caramelized onion and citrus that only come from a wet hopped beer. Tastes like Weyerbacher Double Simcoe with a little less sweetness and more hop oil. There is a well balanced malt sweetness giving it some complexity. The finish is a predictable semi-sweet bitter bite that comes over-top the malts, along with a hint of the 7% ABV. 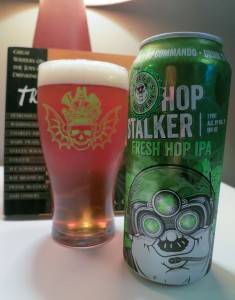 With all the potent hop oils lacing your mouth, this is not a beer that compels an immediate second sip.

In the past few years, a number of breweries have taken on the logistical challenges of distributing fresh hopped beers. Founders has the consistently solid Harvest, Surly for a few years did Wet (not brewed in 2014) and Deschutes bottles Chasin’ Freshies, to name some of the most distributed. At the mercy of crop yields, and availability, wet hopped beers can vary year to year. All of the control of hop pellets goes out the window, and the wild nature of fresh hops can create beer that challenge the palette, as the brewmaster is limited in hop selections.

In this context, Fat Head’s Hop Stalker is a success. It takes the fresh hop and lets it be the star. Malts and yeast notes take a backseat to the ultra fresh hop flowers. Dank and very bitter, and loaded with what I believe are fresh Simcoe hops, the 2014 Hop Stalker is to IPAs what Islay whisky is to single malt scotch; unrefined and aggressive. With massive flavor and only a short window of availability, anyone calling themselves a hop head would be remiss to not try a fresh wet hopped IPA. Hop Stalker is a great example of what fresh hops can bring to a beer. Drink it fresh!