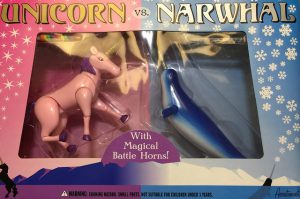 Winter is the season for awful award shows and hearty beers. Barrel aged stouts are among the thickest, booziest beasts of the craft brewing world. So when a legendary brewer like Sierra Nevada decides to brew a new one, we have to uncork it.

Sierra Nevada Barrel Aged Narwhal is the logical tweak on the 2013 GABF medal winning (silver 2013/bronze 2014) Narwhal Imperial Stout. The original base beer, a well hopped American stout bursting with roasted malt flavor, seemed a great candidate for setting down in a cellar, or better yet, to face the refinement of aging on bourbon casks. Unfortunately for some states like Ohio, the 12.9% ABV is too high to permit sales.

Sampled from a corked and caged 22oz bottle. A Sierra Nevada employee posted on a Beer Advocate forum that the aging was “in fresh bourbon barrels (a combination of Willett single barrel, Heaven Hill and various Beam brands)”. 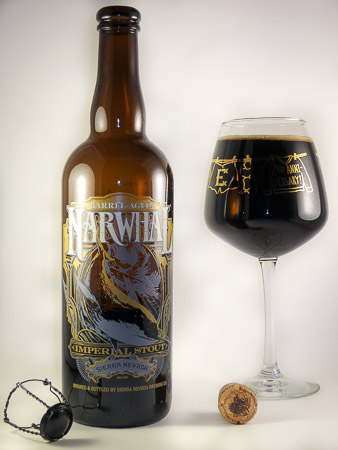 For starters, the regular Narwhal is an impressively huge stout, combining sweet malts with a slight bitter kick of hoppy astringency. A very nice Russian imperial stout, with a bit of heat. A natural choice for barrel aging.
Barrel Aged Narwhal keeps the sweet nose, with chocolate, whiskey, and anise, pouring with an unexpectedly large, latte colored head. One challenge in aging beer on bourbon is getting the flavor of the spirit, without drowning out what makes the beer what it is. In this case, Sierra Nevada gets the balance just right, starting out vanilla sweet, with an oak note mid-palette, and finishing with a slick boozy bourbon kick. The carbonation works though the thick body, washing it down with no lingering barrel. The 12.9% ABV is hardly noticeable in this BA stout wonder. Only the kick of hops has diminished.

Sadly, some of the world’s best barrel aged stouts have no pedigree. Goose Island’s Bourbon Barrel Stout, Deschute’s The Abyss, The Bruery’s Black Tuesday all evoke desire for stout lovers, but none offer up a direct base beer. Experiencing a fresh stout, and then getting to see how it changes after the aging process is a fun exercise. With Sierra Nevada’s Barrel Aged Narwhal, the craft beer fan gets that opportunity to see what goes into the barrels. On top of the available pedigree, BA Narwhal is one hell of a beer. While not as complex as The Abyss, nor quite as superlative as BCBS, BA Narwhal outshines nearly all others, including most of the smaller brewery, small batch BA stout walez. More drinkable perhaps even than the lower ABV non-barrel aged version. Sweet, deep and potent; this is a limited release so grab one by the horn, tooth, or whatever.