Founders Backwoods Bastard, the bourbon barrel aged version of the Dirty Bastard scotch ale, with its 10.2% ABV and huge flavor profile, seemed like a decent candidate for cellaring. For this review, Dave and I compare a 2011 to the most recent release from 2014.

Craft beer enthusiasts often look to mimic wine lovers habits. But while Opus One is conclusively considered to be better having laid down for years—depending on vintage—beer is a more suspicious candidate for this treatment. What most beer guys don’t know however, is that most wines yield a diminished experience with age. In our opinion, beer is best enjoyed fresh. Other than a few specific, high ABV styles, at the margins, beer is not improved with age and most often made worse. Despite our feelings, Founders Backwoods Bastard was considered a prime candidate for aging. And a fine chance to experiment with long term cellaring.

Neither of us are fans of the wee heavy/Scotch ale beer style. The unbalanced malt bombs remind us of the most simplistic failures of English style barleywines or old ales, with less body. As such, Backwoods Bastard was a happy surprise when we first sampled it, the barrel-aging adding layers of complexity and a roundness to the Dirty Bastard base beer. Fresh, Backwoods Bastard is a favorite. The hope that it could improve with age granted me the patience to keep from cracking two Founders gems for three years.

Dave Engbers often tells the tale of how the early days of Founders nearly saw the fledgling brewery go belly up. Brewing the first beer they were passionate about, the aggressive wee heavy Dirty Bastard—our base beer—brought back the excitement to the owners and their customers.

The transformation from Dirty to Backwoods Bastard involves time and aging in bourbon barrels. While this technique is common in imperial stouts, less wee heavy or scotch ales are barrel aged. The 2011 and 2014 releases have the same 10.2% ABV, and as far as we know, same recipe. 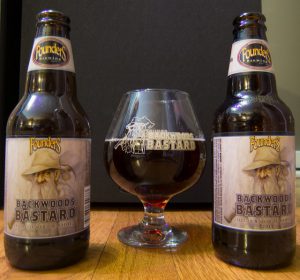 Starting with the older beer, the 2011 Founders Backwoods Bastard (bottled 10/13/2011) pours out cloudy and brown. Minimal head of white microbubbles forms, but dissipates quickly. On the nose, 2011 has hints of vanilla, caramel and cardboard. Taste of the older Bastard is sweet malts with vanilla, oak and toffee, all quite muted. The flavor profile reminds us of an English style barleywine that has sat for a long time. There is a lack of depth in the flavors mid-palette. The body is med/thin, with only the slightest carbonation scooting it down. The finish has just enough hops to retain a slightly bitter kick, giving this beer a bit more complexity. The sweetness stays around, helping to mask the high alcohol content. 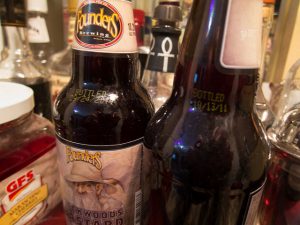 Coming out of the bottle with an observably higher carbonation, the 2014 Backwoods Bastard (bottled 9/24/2014) is ruddy brown, with greater clarity than the vintage bottle. The nose is huge blasts of bourbon, all the vanilla and oak along with a candy sweet note. Flavors are equally huge, following the nose the taste erupts vanilla and oak from the bourbon barrels, paired with a sticky sweetness, leaving only a hint of the high alcohol content. The body remains on the thinner side of medium, but with better carbonation powering the big beer across the palette. The finish is still sweet, with noticeable hops sneaking in on the finish, with the booze showing itself.

When I put a few bottles of Founders Backwoods Bastard down to cellar, the hope was simple. With age, see some of the boozy finish disappear from the beer, while retaining the amazing bourbon sweetness. Unfortunately, what we got in our three year old beer was a shadow of its former glorious self.  Meanwhile, the relatively short three months since our 2014 Bastard was released had pleasantly muted the potent burn Backwoods Bastard can display when fresh.

With cellaring, beer lovers gain an outlet over which to brag, and lust over others hordes. And yet, every day beer sits, even at the perfect temperature, humidity and darkness, it fades away. So too sadly is the case for our 2011 Founders Backwoods Bastard. The fresh bottle is an amazing, treat, perhaps the most bourbon forward beer we have sampled. The aged, at least one going back three years, retains little of what makes it worth tracking down. And for the cost of around $13.00 per four pack, there is no reason to enjoy it at anything but the beers peak numminess.