Prairie makes a few barrel aged stouts. Last year we loved the Bomb!, their spicy coffee stout. They also have a very nice bourbon barrel aged oatmeal stout, Prairie Noir, that comes in 16.9 oz bottles. Prairie Apple Brandy Barrel Noir on the other hand, comes in 12 oz bottles and apparently does not come from the same base beer as that Noir, as there is no mention of oatmeal here. Released for the first time this year, we believe ABB Noir saw a more limited release than the larger format Prairie Noir. Our local could only sell us one bottle, and there appeared to be some trade demand.

Often aged in a mix of old and new cognac barrels, made from Limousin oak, Apple brandy is a spirit distilled with apples as its sole ingredient. The French have long produced the best of the spirit, however newer American versions have recently appeared to compete as world class apple brandy. 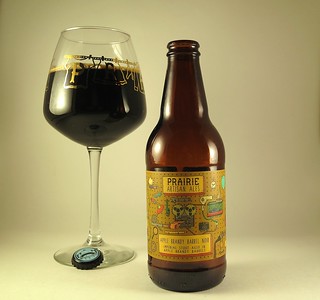 Pouring out viscous black, the carbonation shows itself in brown micro-bubbles that cling to the glass and linger a while. It smells potently of a sweet aperitif with maple syrup. The taste is a bold mix of vanilla and sugar, almost Coca-Cola with a slight hop kick in the finish, reflecting the 70 IBUs. The mouthfeel is oily, with the carbonation doing little, and a sweet, slightly burnt note in the finish. Not as thick as many modern American stouts.

Unlike bourbon or rum barrel aged beers, I and likely most craft beer drinkers, are less familiar with the flavor profile of apple brandy. That said, I have tasted some better French Calvados, although I could likely not identify the specific barrel type used to age this beer. The brandy notes simply are not that distinctive to me.

A spirit aged in cognac barrels, the barrels that aged apple brandy bring sweetness and vanilla in my experience, softening and refining a beer. Here, having not had the base beer, I am guessing those factors again came into play. Prairie Apple Brandy Barrel Noir is a sweet treat, however lacking a full body and the complex flavors of many other barrel aged stouts, keeps it from being a favorite.