American Brown Ale, Texas Brown Ale or as Founders calls this beer ‘Imperial Brown Ale’ generally describes a malt forward beer, a pumped up version of an English Brown recipe with hops like Cascade aggressively added and the ABV often much higher than the British original. The Oxford Companion to Beer notes that American Browns use “(r)oasted and caramelized malts are used heavily enough to skirt the edges of the porter style’ and nearly all have ‘notable hop aromatics’.

Founders Sumatra Mountain Brown bottle is subtle compared to many of their own labels for beers such as Backwoods Bastard and Breakfast Stout. More like Black Rye. The brown and yellow color palette seems to hearken back to an older time, preparing us for a simple beer. Imagine our surprise then, when I spied that this brown was brewed with Sumatran coffee (yes, hence the name) and comes in at a whopping 9% alcohol by volume. This is not a working man’s sipper at the pub. Founders describes the beer thusly:

This bold, imperial brown ale gets its body from a team of malts including Caramel malt for sweetness, flaked barley for dense foam, a bit of Chocolate malt for its deep color and Aromatic and Munich malts to add even more depth. German and Perle hops add a touch of bitterness to balance the malty sweetness. The addition of rich Sumatra coffee takes this perfectly balanced imperial brown ale to a decadent level. 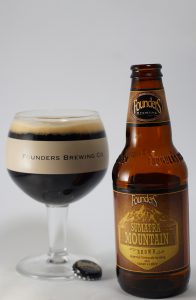 Cracking open Sumatra Mountain, the addition of Indonesian coffee is evident. Dave and I both felt it reminded us of the percolator or instant coffee aromatics one finds in beers like Weyerbacher Sunday Morning Stout. The picture above looks nearly black but as it poured the color is a ruddy brown. The tan head is foamy and lingers a good time for a 9% beer. What you taste is big on roasted malts and of course coffee, nothing percolator about how it comes through in the flavor. Really nice use of the java, with some pop of hops right at the end, with mild bitterness. The mouthfeel is amazingly creamy! Apparently due to the flaked barley, making it highly drinkable, and the beer finishes dry. Great brewers don’t brew high alcohol beers, they make great beer that is high gravity. Drinking Founders Sumatra Mountain Brown I got no hint it was anything above 5%.

Founders Frangelic Mountain Brown was another 9% ABV coffee beer, released as one of the more underwhelming of the Backstage Series in a large format bottle. Despite not setting off the beer geeks fervor, it was a tasty beer with strong hazelnut notes (BarleyWhine.com gave it an 8.0).

Founders Sumatra Mountain Brown comes in at the same 9%, with big coffee notes, dry with a medium body, although minus the hazelnut flavoring. I’m not sure these beers vary greatly in their recipe, which is a good thing. Offering 6 packs of a coffee forward imperial brown ale is a great addition to the Founders lineup. Brown ales, especially those with nuttier notes or coffee, are often gateway beers for those entering the good beer world. As such, Sumatra Mountain would be a great choice to try if you are starting out looking for a craft beer with a balance of flavors, albeit leaning towards the sweeter malt side. This is a fine beer, delivering on what it promises. One of the better straight ahead coffee beers around. find yourself a  4-pack and you will not be disappointed.